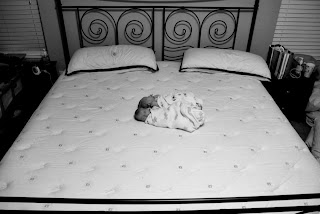 The twins are now six weeks old. Six whole entire weeks have gone by since I laid on my parents green carpet in labor and then wet on their floor while crawling out to the car to ride back to the hospital for the third time in the most awkward/at the time most tolerable position possible!

Tonight, as I sat on the couch watching chopped while pumping out as much milk as possible with baby puke on my shirt and dripping down my what used to not exist but is now up to my chin cleavage I realized something:

But seriously. I realized a few things have transitioned into part of normal everyday life that were once so foreign to me.

First off: Laundry. I know what you're thinking.

"well of course two kids comes with more laundry! Like... really?! You didn't know that?!" Insert valley girl head nod. I do laundry aaaaaaall the time. It used to be once a week was laundry day. Three loads folded and put away in one day. Bam. Done. Did. Now, I do many more loads than three a week and it often gets folded and put away all on separate days. I could not figure out for the life of me how I had so much extra laundry! The boys pee through many an outfit a day but not that many. I mean, come on! But like I said I was sitting there with spit up on my shirt... before babies it would have been clean enough to wear again (since today was the first) and I would have put it away, not in the laundry basket. However, not only do the boys go through their clothes more but so do we! Due to their bodily fluids instead of putting things away, they go to the laundry basket. Hence... more laundry.  Not only that but I constantly forget that there is laundry in the washer/dryer.

"So that's where my jeans are!'


Next: Pumping. While Wyatt was in the hospital I would feed Oliver then pump a bottle for Wywy. Then an hour later I would be so full I would pump another four ounces. No typo... four and keep in mind I still had enough to start the cycle over in another hour. Now that both babies are here, I nurse them both and then pump again in another hour and again in another hour nurse the boys till their bellies are full and happy. Anyways, my pumping capacity now fluctuates much more, and since Jake does the 3:30 feeding I need that leche for them and it becomes rather stressful when I don't get that much! Recently, I've noticed that I accidentally have started a competition with myself.

"That's so much more than yesterday! Yes!" Pat on the back, high five, grin.

If you had told me that I would be competitive about pumping my breast milk I would have thrown. up.

Third: Working out. Not much to say about this yet, but If you know me, you know I like to work out. Not being able to for so long kinda broke my heart a little, and last week I got the all clear to return to life as normal. Today I started up. It was a simple yoga class, but from what I had heard from everyone and their mom, honestly... and their mom, "you will pee your pants!" So here I was walking into yoga legitimately scared to death that I was going to wet my pants, so I placed my mat at the very back corner closest to the door just in case. I understand that there really was not a whole lot of jumping involved but at no point did I ever feel like I was going to wet my super cute, rather flattering, Lululemon yoga pants. Mission accomplished.


On to...: iPhone pictures. What used to be a pretty normal photo album of pictures is now babies. To others, I'm sure all of them look the same but to me each picture is unique.

Another obvious one: Going places/scheduling between feedings. I swear when I take the twins places with me I feel like I'm packing to go to battle and I have to do it strategically between feedings. Yes, I could nurse in the car but it is really hard! I tried it and it was a disaster... The steering wheel is in the way but I can't scoot the seat back because the car seat is in the way and I can't move to the back seat because both seats have a car seat on them and the other one is screaming laying on the seat beside me and I can't cover myself and people can see in and... trust me. I'm just not skilled enough yet for that to work, so I'd rather not.

Gone: Clean Bed sheets. One of my favorite things in life is slipping into a made bed with clean bed sheets. Lately, it has become even more of a favorite thing because it is much more rare. I don't even think twice about climbing into bed when Wyatt had urinated all over my side of the bed and there is a crusty puddle of spit up next to my head from Oliver. At first I would wash and change them every time but I've since given up. Even though having clean bedding is one of my favorite things, changing the sheets is one of my most dreaded.

And last but certainly not least: Cups. My ever changing cup size. I don't even know what it is anymore. A bra could fit me after feeding the wee ones and two hours later be ridiculously small. How on Earth do they get so huge in a matter of two hours?! I just don't get it. *sigh* so weird...

And there you have it. My current deep thoughts. Intriguing? Of course, I knew you'd think that which is why I was ever so kind to write them all down for you.