I have not made a blog post in a long time. And for some weird reason I feel a little bit guilty about...
Here are just some random highlights of the past little while.

1.  Jake and I have actually looked at a couple small houses. Since he's working on foreclosed homes right now, he has the keys so if he sees one I might like we go look at it together and talk about what we liked/didn't like about it and what we want in our first home. No no, we are not looking to buy one right now but we think it's a good idea to get a feel for how this whole thing works. And he's taking a Real Estate finance class in the fall so hopefully we'll be pretty prepared!

2.  Oh it was my birthday 9 days ago. I turned 21. So we went to the casino and gambled a little just cause I can (and because I love blackjack and am pretty good at it most of the time) and of course I ordered a beer... for his friend! I asked the waiter if he'd please ask for my i.d. He probably thought I was a little strange, especially when I handed it off to someone else!

3.  We've gone i. Now we both have iPhones (Jakey-poo of Love got me one for my birthday since he got one from his parents at Christmas). Add me to your Words with Friends app! Both of our computers are on the fritz. So yes, we bought Macs. Refurbished AND on sale AND Jake has landed some good houses that have made a little extra money. I was so nervous when he told me that he actually bought them I almost peed my pants. I am so scared of spending big wads of cash. His came on Saturday and mine should be here any day now. I am also proud to announce that we are not in debt and bought them flat out. The whole converting files thing is a pain in the patootchie and so NOT as easy as everyone said it would. The frustration it caused resulted in a few words and phrases that should not be published.

4.  My internship at Bishop Manogue Catholic High School as an athletic trainer has come to an end. I will not miss the khaki pants, polo shirts, looking like a high school student, and identity lanyard but I will miss the students I was in class with and the athletes. My last few days were spent working the regional softball tournament and I enjoyed the games much more than I thought I would. I did get a gnarly farmers tan and lanyard tan on my neck from it. My lanyard was the only thing that made me look different than the kids. I got to help with a few concussions, icing and wrapping, a couple of girls running into the fence (what the...?) a lip getting caught in braces, broken fingers, and a fingernail that was ripped off by a ball at a baseball game. Oh, and I filled up a LOT of ice buckets and water jugs. Tomorrow I am starting at Pendola Training which is an athletic clinic that helps injured athletes as well as those who just want to get better at their sport. Yes! I get to live in work out attire for the next couple months!

5.  Jake's sister, Rachel, interviewed us and posted it on her blog. She's doing it with all her siblings and calling it "The Sib Series". I would post a link but it is much too embarrassing for me to want to do that.

6.  Yesterday I cut Jake's hair for the first time (actually the first time I ever cut anyone's hair) and did a fantastic job. I don't wan to toot my horn but... Toot! Toot! Shout out to Jeni for letting me watch her so many times and to Tom for letting me practice a few strokes with the hair clippers. *tear* I feel so blessed to have such great examples of barbery in my life. I am considering charging a few bucks to cut some guys' hair out on the island. Hmm...

7.  I saw a homeless/poor man on the exit ramp at the freeway and I'm always a sucker for those. I can't help but feel so awful for those people (I know, I know some are just scams and will go buy booze and cigs with the money bla bla bla). Anyways, I read his sign and it actually gave me a little hope in people that actually are trying to make their lives better. Instead of it just asking for money, his said "Handyman, will do odd jobs and fix anything for a meal/ few dollars". I really wished that we had a house with a leaky faucet or something so I could help him (I didn't have any cash on me. And I know, my husband grew up doing plumbing so he could do something like that for free but it would've been for a good cause). 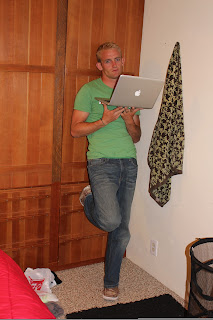 This is Jake standing in the corner trying to find an internet connection. I took this opportunity to pants him (thanks to mys sisters who taught me this at a young age; when you have the opportunity to pull someones pants down just because... you take it). This was much more appealing to me than last night when Jake's 18 year old brother pulled his pants down to his ankles and left them there. Ian, who is 20, immediately followed this example. I'm just happy that no other males were in the room to continue the trend!
And so, that is our life as of late.

Shellie is having a baby girl in October!
Posted by Erica and Jake at 8:33 PM 1 comment:

First time for everything... 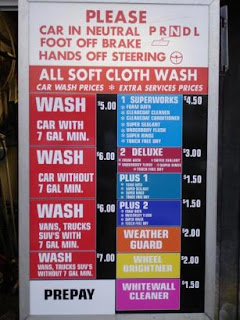 Growing up, paying to get our car washed, even thinking about it, was insanity.
My mom would say "Why would you pay someone to wash your car when you can do it for free in the driveway?" (Add disgusted look on the face)
Well the 15 hour drive from Arizona to Nevada made my little Lucy disgustingly dirty. Inside and out! And I like to keep my car clean... really clean.
There was dirt, dead bugs, bunny sadness (maybe not physically but emotionally still there) sand, crushed goldfish crackers, you name it dirty-ing the in and out of the car.
So on Saturday, Jake taught me how to go to a drive through car wash for my very first time. And I'm almost 21 years old.
It was weird. SO weird! And a little bit scary...
I'm claustrophobic and when I couldn't see out the windows because of the suds, and knew I wasn't allowed to open the doors, I panicked a little bit.
They had free ever-lasting-vacuums at the end and rags to wipe down your dash, etc.
It was easy. It cheap. It enabled me to be lazy. And made me happy that Lucy is clean, happy and healthy.
Posted by Erica and Jake at 11:20 AM No comments: