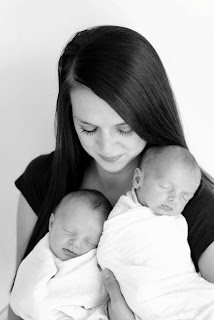 My pregnancy was pretty normal and we anxiously awaited the 36 week to 38 week mark, which is when many twins arrive. Starting around 30 weeks I was having lots of irregular contractions so around midnight of October 18th, I ignored the pains I was feeling. Around 5am of the 19th I woke up and timed my contractions every 10 minutes for about an hour. I was nervous to tell Jake I thought I was in labor because he had a presentation for his business group at 8:30 that morning. I hesitantly woke him about 6:30 and told him what was going on. I asked if he wanted to take separate cars to the hospital in case it was a false alarm he could make his meeting and I could drive back home. We loaded our bags and car seats, turned on the dishwasher and headed out in the same vehicle. 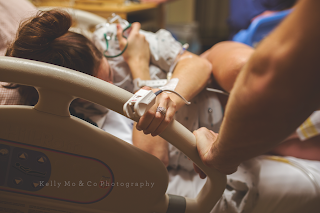 We were in triage for about an hour, walked for an hour, and were finally sent home when nothing had progressed. I was so disappointed when the contractions suddenly slowed to one an hour. We went to my parents house to hang out for a little while because they live much closer to the hospital. I took a nap, watched some tv and ignored the cramping again. Late afternoon, we accepted that nothing was happening that day. Around 8pm everything started up again with a new level of intensity! We headed back to the hospital and were there for another hour. I was in so much pain and could not keep anything down, even water. I was given Morphine, Terbutaline and Ambien. Although none of them worked, I was sent home again! Because I was a few days short of 37 weeks (full term), they were not allowed to help me progress including breaking my water or giving me Pitocin.

Again, we went to my parents house to wait to go back later. On top of my contractions that never stopped, I was having terrible back labor that could not be relieved by anything. I tried ice, heating pad, taking a bath, laying down, sitting, standing... Around 5am, we went back for the third time and I was finally admitted at 5.5cm dilated and 100% effaced. It was so great to finally be checked in. I was moved to a labor and delivery room and asked for an epidural as soon as I could speak through another contraction.

That feeling of relief I got was the amazing! I don't know how I could have endured the rest of labor without it! While laboring, I was instructed to keep the oxygen mask on as both babies' heart rates were dropping during contractions. After the epidural, things starting moving very quickly! Oliver Lyle was born at 10am and was given the okay. Oliver had some low blood sugar and did spend a few hours in the NICU until it was raised. He cuddled with daddy while I immediately starting pushing Baby B. The doctor was worried because his heart rate was still dropping and was "sunny side up" and stuck on my tail bone. He was helped out with the vacuum in order to avoid an emergency c-section. Wyatt Daniel arrived at 10:21am and was taken to the NICU promptly.

About an hour later while I was in recovery, a code blue came over the speaker which I immediately knew was for our baby. Jake and I were rushed to the NICU where he was surrounded by a team of doctors and nurses. We were told he had a seizure and stopped breathing. The two of us were able to hold him for a few minutes and he was then flown to Cardon's Children's Hospital. 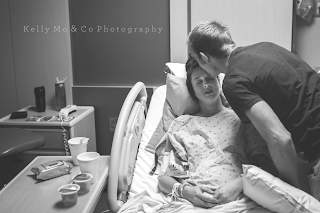 Wyatt was accompanied by 4 nurses and a security guard which left no room for another passenger. Jake met the helicopter at the hospital to be with Wyatt. After several CT Scans and EEG tests, we were told there was no evidence of any permanent brain damage due to his episode. Wyatt spent 8 long days in the NICU.
Just as we thought we were out of the woods, we received a call that Oliver's Newborn Screening came back with a mutated gene for Cystic Fibrosis. We later took him to Phoenix Children's Hospital for a Sweat Test. The test later came back negative, meaning that Oliver is only a carrier for the disease.
These boys definitely keep us on our toes! 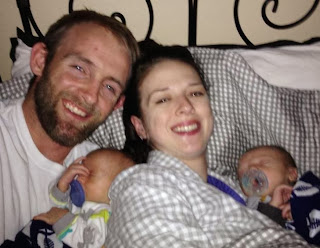 Since then, our life has been a whirlwind of diapers, strollers, and bottles. It has been absolutely insane, but also amazing. I couldn't love these babies any more.

I hope to get better at this

I'm so bad at this blogging thing. Sorry. I've been waiting to blog about the twins because I want to include all the adorable pictures I have had taken of them, so I'll give you a small super duper oober gooey treat, and then post a really big long juicy meal when I get the professionals back.

These are my babies. 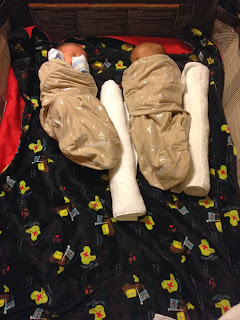 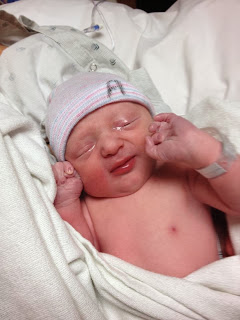 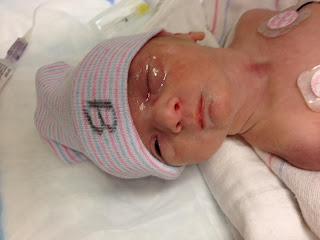 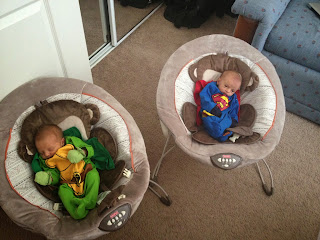 We are so happy that they are both home and healthy.

After our scary ordeal with Wyatt having a seizure and coding, then Oliver scaring us with a Cystic Fibrosis scare we are confident that all is well with their little bodies.

Wyatt had a seizure shortly after being born and was AirVacced to Cardon's Children's Hospital. He was escorted by 4 nurses and security gaurd. (details coming later) 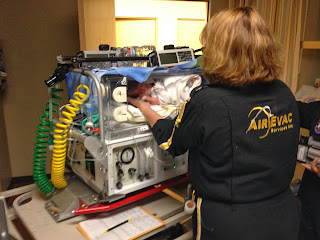 Oliver's newborn screening came back with a mutated gene for Cystic Fibrosis. After a sweat test, it was confirmed that he is only a carrier which will not affect him unless he has kids with another carrier. Jake and I are now being genetically tested to find out who, if not both of us, is the carrier.

It's pretty crazy the things I never thought would happen have happened and it hasn't even bothered me yet. For instance... I've slept on sheets that have peed on, baby poo on my arm, and a shirt covered in baby puke.

Let the games begin!
Posted by Erica and Jake at 7:10 PM 1 comment:

This is Eric and Brenley. They are our good friends and we love them. 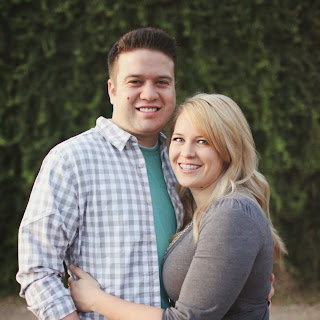 Eric and Brenley have been trying to have a baby for a while now... like 3 or 4 years. (They also referred us to Dr. Amols who helped us obtain our wee ones.)

They recently were certified to adopt and I am so excited for them! I'm trying to do what I can in helping them become parents (which sounds pretty awkward) which is why I posted a link to their blog below. The more we can spread the word, the more likely they will be placed soon!

Check out their amazing story here.

Posted by Erica and Jake at 6:47 PM No comments: