This last week, our poor puppy had Parvo.

I was honestly the saddest thing I have ever seen.

Last Sunday night I noticed she was acting a little unlike herself and mentioned it to Jake but thought maybe she was just worn out from playing with my parents' and my sister's dog at Family Dinner. Monday morning we noticed something was really wrong. She wasn't wanting to move, eat, drink play, nothing. We decided that if she wasn't better by Tuesday I would take her to the vet. Tuesday morning was another downhill slope. She was still not wanting to do anything, including getting up to go to the bathroom and vomiting. She literally just laid in her own yuckiness. I brought her in to the vet she was diagnosed with Parvo. The good news was that we had caught it in the early stages and I was able to bring her home as long as we kept up on her medications. Every few hours we had to give her an IV of fluids, a shot (a huge and painful shot by the way) or force a pill down her throat.

It's one thing to give yourself a shot but I could not bring myself to do it to a helpless little puppy which I couldn't even explain to her why we were doing it or that it would make her better! So... I taught Jake and I held her why he did it. 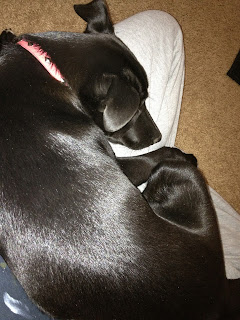 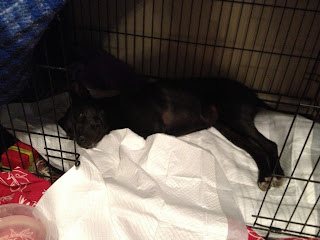 He dealt with a lot. Giving the wee babe a shot and consoling me while I cried at the same time! I think I asked at least 4 times a day if she was going to die.

We are happy to report that Koa is just fine now and back to her energetic self! She is even making up for the time she lost destroying things.

This weekend we did a full disinfect of the house and had her bodily fluids removed from the carpet per ChemDry yesterday.

Most dogs that get Parvo are between newborn and 18 months old, especially if they aren't current on their shots. That's where we went wrong and the bad parenting began... Koa was supposed to get her third round of shots just after Christmas and it was just one more thing we didn't get to yet. We think this is why she picked up the sickness. In a few weeks, after her immune system as recovered, she is scheduled to get her shot.
Posted by Erica and Jake at 1:51 PM