So as siblings in the Lyle family we share the love for some movies that we quote all the time. Mrs. Doubtfire and Father of the Bride (Part II especially) are probably the most common. 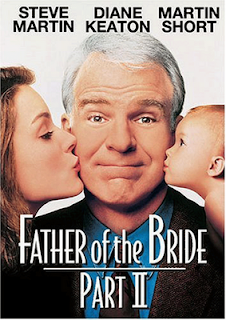 So the other night we received a little bundle of joy; a red envelope from Netflix. I truly was giddy when we grabbed our movie snacks, popped the DVD into the computer and cuddled into bed to watch this stroke of genius.

While watching this movie, I think Jake understood my family jokes a little bit better and certain things we say and do make more sense. Growing up we would sometimes tell each other to "makaya kellem"! (sp?) This comes from the part where Mr. Habib is trying to buy the house and says that to his wife, then Mr. Banks carries that line through the movie. (I searched the internet for this scene but it is no where to be found). I now recieve the "makaya kellem" from my very own hubby. I should have never shown him this movie.
However, I would have to say that my ultimate favorite is Franck. But duh. He's most people's favorite character. And I think this scene is why.

When I get pregnant,I expect to be given a workout leotard that looks identical to theirs so I can do the "happy tin soldier" and "make the baby sleep".
Posted by Erica and Jake at 12:58 PM